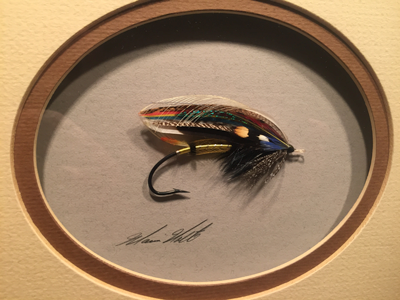 Philippians 3:13b
“But one thing I do: forgetting what lies behind and straining forward to what lies ahead.”  ESV

The Jock Scott Fly takes over forty-three meticulous steps to properly tie.  When you see one, you’ll do a double-take.  It’s a famous Atlantic Salmon fishing fly originated by John (Jock) Scott of Roxburghshire, Scotland around 1850. You wouldn’t say to a person who had just tied a Jock Scott fly, “Do you see that one feather out of place that’s a bit damaged?  Just toss it in the bin.  Throw it away.”  That would break the barriers of absurdity.

Yet, many times in life we have experiences that are grand, weekends to remember, days that are filled with glory, and then what happens?  We mess up, and then we feel terrible, and take days, weeks, or even years to recover; all the while missing out on the sacrament of life found in each fleeting moment that is but a breath in eternity.

“‘If it’s not perfect…it’s terrible!’ says the dualistic mind.”  Richard Rohr goes on to say, “The dualistic mind cannot process things like infinity, mystery, God, grace, suffering, sexuality, death, or love; this is exactly why most people stumble over these very issues. The dualistic mind pulls everything down into some kind of tit-for-tat system of false choices and too-simple contraries, which is largely what ‘fast food religion’ teaches…”

Have you found yourself blotting out the joy of life because you or someone you loved didn’t make the mark?  Romans eight tells us that nothing can separate us from the love of God in Christ.  Not our faults, failures, or short-comings (Not separated {‘I’m a new creation} vs. separated because of failure {dualistic thinking}).

God has exponentially more than forty-three meticulous steps in tying the fly of the poem of your life.  He started knitting (tying) before you were born (Psalm 139:13).  Don’t throw away life because of mistakes.

View all posts by freetoliveministries